It's a small world, after all.

There is nothing like international travel. There is also nothing like sharing it with others! In the short time I have been in Israel, I have had the privilege of meeting up with some friends. Some expected, but a couple that were a surprise!
﻿﻿ 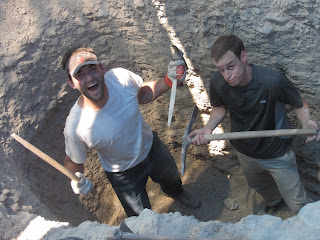 I knew that Daniel and Katie Joy were planning on making it to Qumran. In fact, we had scheduled to have them join me on the dig for a couple of days! What I didn't expect was for Joshua Cook to show up. We had barely talked about the idea, but I was pleasantly surprised to see three friends walking up, instead of two!

We enjoyed great conversations from comparing travel adventures, to the typical verbal exchanges of friends. It was refreshing to take discussions into deeper waters, without having to give lengthy background information that is necessary with strangers.
﻿ 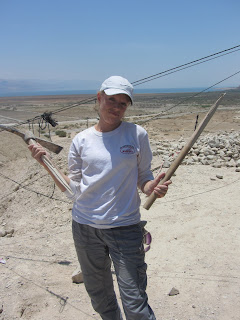 Sadly, they each had to move on to other things. Joshua Cook just graduated from Dallas Theological Seminary (DTS), and was about to begin a tour with one of his professors.

Daniel and Katie Joy had just completed an Israel tour with Northwest Bible Church (in Dallas) and were on their way to visit Petra in Jordan. From there I think they were planning to meet up with Daniel's sister and tour Greece.

So here I thought it would be another week until I saw a familiar face, but that wasn't so bad. That's when God provided for a surprise encounter with another friend from Northwest Bible Church, Sarah Margaret!
﻿ 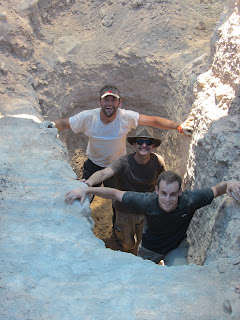 Sarah Margaret and I had discussed her visit to Israel, but it seemed her tour wouldn't line up with my stay. I had dropped it from my mind thinking that it wouldn't happen. I wasn't looking for her.

Sarah Margaret was touring with her family as part of a group from Dallas, TX. She had visited the dig site and not seeing me, she asked for me by name. I have no idea whom it was she asked, but this individual didn't have a clue who I was. Perhaps he was one of the Bedouin or the geologist that just showed up a few days ago. In any case, she thought that my group had moved on. She was no longer looking for me.
﻿ 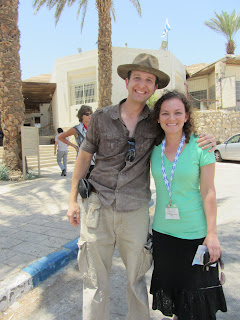 For some reason our group stopped working early today. No one complained, but we all made our way to the cars. As Dr. Cooper started to drive off, I looked at the tour buses and one happened to catch my eye. The group said that they were from Dallas, TX. I found that to be unique enough that I pointed it out to the rest of us in the car. They didn't seem to care. When I turned to tell them, I looked out at the sea of tourists and noticed a familiar head of hair. I looked closer and sure enough, it was my friend! I was caught off guard and excited. I could barely collect my thoughts and asked Dr. Cooper to stop the car. I am sure he thought I had forgotten something. I asked him again and he complied. The group was headed back toward their bus and I was running out of time. In my excitement, I shouted out, "Stephanie"! Once the words came to life, I realized that I hadn't said her name--though it did get the group's attention. (For clarity, I may have an impeccable memory for faces, but names have always been like kryptonite to my memory. I will always get first letters right, but rarely do the names come close...or even sound alike. Please dear friends, don't take this personally if it happens. It just means we should spend more time together to help my memory.)

In any case, as a stranger was rushing up toward the tour group, shouting random names, Sarah Margaret saw me. Though equally shocked, she showed her mental prowess and accurately recalled my name, amidst laughter. That is when I recalled her true name, not her spontaneously created alias, and I apologized. I'm not sure she even understood me. After we hugged a friend from another land, we posed for pictures. I briefly met her family before I had to go. What a pleasant surprise!

Well there are only 5 days left on this trip and I am left wondering if I will still see others.
Posted by Unknown at 2:43 PM No comments: